A bloke who everyone thought was a potato turns out to be an F1 driver, it’s been revealed.

The driver had been hiding inside a Williams F1 car which, because it had been going so slowly, made nobody suspect anything untoward.

F1 fan Mitchell Bitchell said, “I like Williams but were surprised when, based on the photographs I saw they appeared to announce a potato was driving for them.” 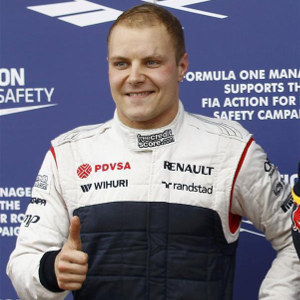 “I just assumed they were getting sponsorship money from McCain or maybe the Jersey Potato marketing board or something because Maldonado’s money had already gone on repair bills.”

But the F1 world was shocked to discover the King Edward lookalike was really 23 year-old, Valtteri Bottas when the non-vegetable matter-based Finn came 3rd in Montreal qualifying and had to attend the post qualifying press conference.

“I thought it might get a bit awkward,” James Allen said later.

“I knew what I could ask Seb and Lewis but had literally no tuberous esculent questions in my locker.”

“I was going to fall back on asking whether he thought he’d have his chips on the run down to the first corner – you know; as one of those humorous asides I’m so well known for – but fortunately it turned out he was a fully functioning human being capable of thought, speech and emotion so it didn’t matter in the end,” the BBC 5-Live commentator said.

Realisation that the 2nd car is not being driven by a vegetative being will bring extra pressure to bear on the team from Grove as a result, however.

“It certainly looks like they’ve swapped a potato for a lemon!” Allen quipped to a rapidly emptying room.