Jean Todt was just looking for his glasses actually, upon being spotted under his desk.

The bloke inexplicably married to Michelle Yeoh hadn’t been seen since before the Bahrain Grand Prix when the Frenchman first misplaced his bifocals amidst threats of violence, intimidation and unrest at the Middle East event.

The head of motorsports governing body said, “I wasn’t scared but in my line of work it’s absolutely crucial I can see what I’m doing.” 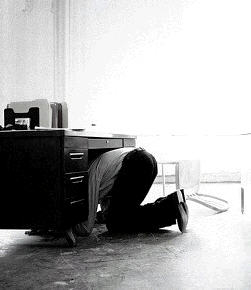 If you look closely, you can see him failing to shit himself

“There’s no point turning up to a Grand Prix without being able to see properly and making poor decisions as a result.”

“That’s what the stewards are there for,” he added.

82 Year old head of F1 cashflow, Bernie Ecclestone agreed: “Jean left a message on my phone to say he’d lost his glasses and was very sorry but they were a special pair and he couldn’t get a new set in time and would have to stay in Paris under his heavily armoured desk.”

“He told me this in January.”

Despite the violence, intimidation, restriction of human rights, torture, mayhem, state sponsored thuggery, misinformation, threats and all round ghastliness however, Ecclestone thought the event a success.

“It was an absolutely super race, I thought,” said the Octogenarian arsehole.

“At least that’s what somebody told me, I’m afraid I couldn’t see the television from behind all the gold I had piled up on my desk.”