Ayrton Senna is said to be turning in his grave after Sebastian Vettel’s antics at the Malaysian Grand Prix brought comparisons with the dead Brazilian. 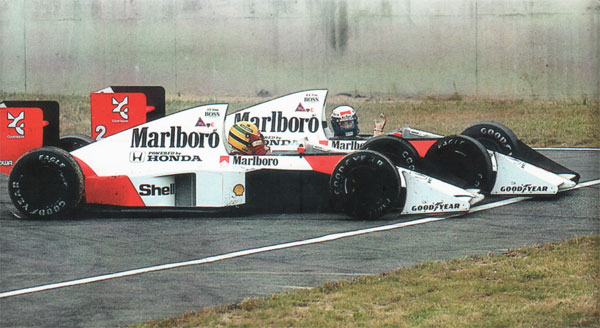 Speaking via poltergeist-bothering Scouse charlatan, Derek Acorah’s mouth, he told a disinterested, cynical production crew on infra-red camera from the nearest lock-up garage to the Living studios, “I strongly wish to disassociate myself from the actions of the current World Champion.”

“What Seb did on Sunday was completely wrong. The correct action would have been to have taken the win and driven Mark off the track,” the car racing cadaver explained.

The German Red Bull driver’s team order flouting in Malaysia was condemned by observers; many of whom were appalled a motor race was allowed to break out when the accepted protocol is to remove any semblance of excitement over the closing laps, thereby allowing journalists to file their copy and finish the last pint of red before breakfast, in peace.

“Sebastian didn’t even suggest none of it was his fault and anyway, he was being victimized,” continued Senna in a surprisingly thick Liverpudlian accent considering his nationality.

“I’m appalled anyone even thought it was the sort of thing I’d do,” he added.