Ron Dennis has admitted his record collection stopped in the early 90s.

The Mclaren Chairman was talking on the eve of the 2013 season about the loss of Lewis Hamilton to Mercedes and whether his team could have done more to retain the services of the Nicole Scherzinger blow-up doll.

“I think we offered enough money. A good package: bonus, pension. Use of the gym. Free tracking device buried in his head so we knew where he was at all times. Solid Mclaren benefits everyone in our family gets FOREVER,” he said. 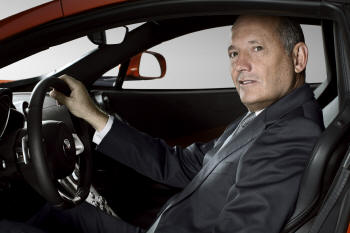 Out go the Moody Blues; in comes Lionel Ritchie!!!!

“But maybe we just weren’t on the same wavelength by the end. Lewis is a young, black, urban male. I’m a multi-millionaire business man obsessed with carpet swatches: maybe Lewis wasn’t comfortable in that environment?”

Dennis went on to explain how the likes of Tiny Tempah and Dizzee Rascal left Mclaren’s senior shareholder shizzled n’ting.

“Unfortunately, this was for my niece. Before that, it was Fool if you Think It’s Over by Elkie Brooks in 1978.”

But the most boring holder of the CBE in the Western hemisphere went onto explain how things have changed for the better since being exposed to the equivalent of MOBO Royalty.

“To be honest when Lewis started hanging with the likes of Kanye West and Rihanna my first instinct was to call security,” he admitted.

“But as the cutting edge, youth-orientated company Mclaren have now become, we now welcome these beat-boxers and hop-pickers with open arms.”

“Though if Kasabian turn up, I fucking will call security,” he added; “with extreme prejudice.”

Not you, it’s me says Alonso