Jules Bianchi ’s facial muscles are getting a real workout as the Italian attempts to pretend his Marussia drive is a dream come true.

The 23 year-old Ferrari test driver had already missed out on the chance of joining the Scuderia before erstwhile heel-kicking subsidizers Force India similarly declared themselves apparently more satisfied with an unremarkable German fond of a drink in the Glaswegian style.

Now spat into the still sweaty seat of Monopoly money-funded GP2 runner-up, Luiz Grazia, the Italian was thankful for all those jumpers his nan knitted him every Christmas. 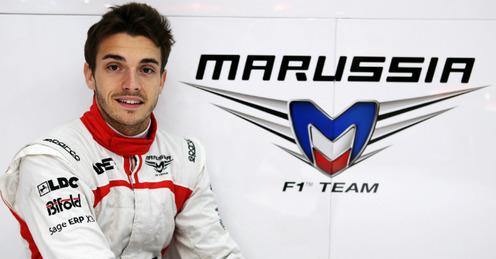 “Hurry up, before I start crying”

“I am really grateful for this opportunity Marussia have given me,” Bianchi told journalists, hurling his face into the shape of a smile.

“They have enabled me to fulfill my dream of becoming a Formula 1 driver and I look forward with great excitement to the forthcoming season,” he added, sounding almost plausible.

A ram-rod sense of traditional family honour came in handy for Marussia’s latest walking subsidy; the Italian having to pretend his grandmother’s hand-knitted garish pullovers were what he really wanted rather than that Lego Tecnic set, every frigging year from the age of 7.

And the bitch still not listening when he asked for a remote control helicopter.

“I’m absolutely thrilled about the exciting challenge I’m about to embark on,” the youngster grinned, except with his eyes.