Kimi Raikkonen has been reminded he’s been married for the last 8 years.

The 33 year old fun loving Finn was roused from his traditional mid-afternoon daze to be instructed a woman calling herself his wife didn’t want to be that any more and was leaving him and his novelty-shaped vodka jellies for good. 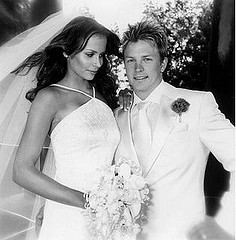 As far as he’s concerned, a deleted scene from the Matrix

“He was aware of this woman hanging around but thought she was just a mate. Or maybe the cleaner. At any rate, he swears categorically he has no memory of having married her or anyone else for that matter.”

According to Wikipedia, Jenni Dahlman married the then Mclaren driver in 2004; remaining betrothed to the Iceman right up until this week when the former Miss Scandinavia decided she was better off with someone capable of displaying emotions beyond 2 different types of apathy.

“He was quite a handful back then; I guess getting married and forgetting he’d done it isn’t even the craziest thing he’s ever done.”

“I mean: he nearly signed for Williams once: that’s not even in the top 5!?!” he observed.

Fuck off out of our seas then, seagulls tell Vettel