The North London side crashed out of 2nd rate soccer-bauble competition, the Capital One Cup on Tuesday making it even less likely the perennial underachievers and Premier League squad suppliers would add anything to their windswept trophy cabinet.

“I am really impressed with Arsenal’s history,” Hamilton began. 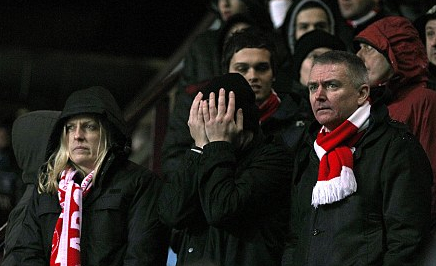 Could be worse: we could support Mercedes as well

“Years and years ago – almost before I was born – they used to win loads of stuff.”

“They’ve a manager who was famous for winning trophies with a completely different team and set of personnel who’s unaccountably been kept on in the vain hope his talisman like-properties will somehow galvanize them into something other than perennial abject failure.”

“It just sort of appealed really: I’ve no idea why,” he added.

Hamilton controversially left the 2nd most successful Grand Prix team in history for Mercedes GP where he hopes to develop his own line of hats, jewelry and aftershave whilst driving around and around in a big shiny silver car every other weekend all over the world to advertise it.

“Arsenal have decided they can’t compete with billionaires so have concentrated on maximizing revenue from a bunch of mugs they call “fans”,” Hamilton said.

“It sounds absolutely brilliant and exactly the sort of thing I’m looking for at Mercedes”.

“Targeting the top 4 every year and fuck all else sounds about right as well,” he added.