US citizens are really impressed with the system F1 has perfected of exploiting the shit out of them to make millions and millions of dollars for a tiny number of utter bastards.

“We’d like to welcome you here to our beautiful God-fearing, money-worshipping country and say how proud we are of your F1’s ability to rip every last dime out of even the poorest guy who accidentally crosses its path.” 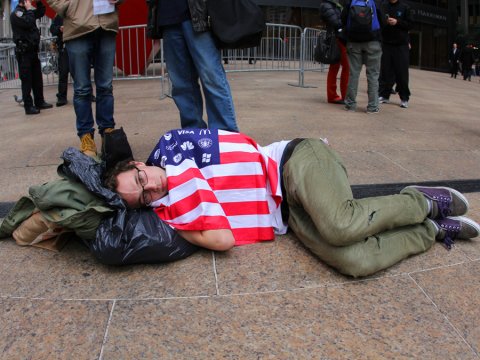 “Why, your very amoral, avaracious nature is so insatiably cunning you might as well have been conceived, born and bred in this very nation!” he said, before firing his gun into the air and going off to eat grits and drink moonshine or some shit like that.

This weekend’s race in Austin is the first United States Grand Prix since Lewis Hamilton crossed the line at Indianapolis in 2007, instantly becoming the latest F1 sensation to spark nothing but total indifference in the American populace.

And whilst Fernando Alonso and Sebastian Vettel battle it out to the sound of windswept grandstands, the Grand Prix circus will always have a place in the hearts of a nation addicted to being fist-fucked by corporations every minute of their advertising-saturated, increasingly indebted lives.

“I had to sell my trailer to come here and see my Gran Pree heroes, then trade my medical insurance now I’m here just to afford a beer but I’m proud to be a part of the biggest sports fan gang bang in human history,” penniless unemployed truck driver, Sherman Dwightburger said.

“With all my patriotic heart, I hope we erect a statue to Bernie Ecclestone in the White House for his incredible foresight to realise I would sell my own blood for a ticket,” he added, prior to passing out from a lack of food.