The Red Bull F1 team are systematically destroying everything the parent company’s marketing department has spent billions of dollars trying to create over the last 10 years.

Attempting to cultivate an edgy, seductive image to persuade millions of gullible idiots its gassy drink is less vile than its rivals’ gassy drink, the fat cow-emblemed company has sponsored death defying stunts, pantomime diving contests and terrifying hirsute Australians in pursuit of this alluring Euro.

But with its F1 team systematically crushing the opposition during the month of October, the Milton Keynes outfit has done the equivalent of downing a family sized bottle of fizzy battery acid before pissing it back in its own mother’s face. 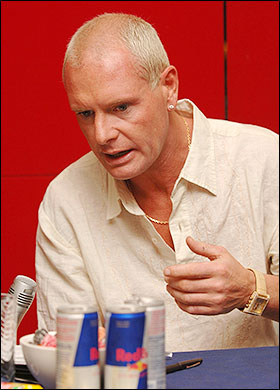 Anyone know another way we can fuck our image up?

Grizzled veterans of the F1 paddock too, have been swift to criticize Austria’s top dental earner: “pulling the 2012 season rug out from under the fans has revealed a season’s promise as nothing more than the lilting gust of wind from a German’s fizzy-drink branded Y-Fronts,” said Tamara Ecclestone.

“Is everything Felix Baumgartner fought and fell out of a balloon for going to be in vain?” she snivelled.

It’s thought lowering Adrian Newey into a lead box for the next 3 weeks and turning Mark Webber’s crash settings off is too little too late though a Scooby Doo ending where Sebastian Vettel reveals he’s really Ayrton Senna all along might just swing it.