The search is on for a thing that Kimi Raikkonen might enjoy doing.

The Finn’s 19th career victory at the Abu Dhabi Grand Prix was the first since his 2 year sabbatical from the sport yet the Lotus driver looked like somebody who’d just finished a mildly satisfying Pret-a-Manger sandwich only to recall it tasted better the last time he had it.

Person keen on finding what makes the Finn cheery, Cath Gumption said, “Kimi’s funny image is a man who finds nothing funny at all – which is hysterical, of course.” 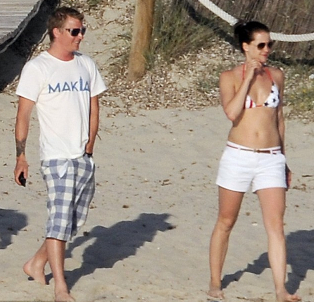 “But I at least thought victory would yield an expression equivalent to the vaguest sense of job satisfaction but instead it just looked like he’d inadvertently trod in some dog mess but had the good fortune to be near a puddle to clean it off with, straight away.”

The 33 year old made a stony-faced debut at Sauber in 2001, shrugged his shoulders upon graduating to Mclaren and was largely ‘meh’ during 3 years at Ferrari.

2010 and 2011 were spent being broadly underwhelmed by the World Rally Championship before his taciturn Lotus comeback this year.

“The complete absence of joy accompanying a joyous event makes the conceit Kimi is at heart a friendly person with the outward demeanour of an indifferent, bored, millionaire increasingly hard to swallow,” Gumption continued.

“Basically, I think he may just be an indifferent, bored millionaire,” she acknowledged, disappointingly.