Lewis Hamilton has officially conceded the BBC’s 2012 Sports Personality of the Year award.

The 27-year-old Mclaren driver admitted his chances of landing the corporation’s coveted layabout sports’ referendum for the first time had gone following a glimmer of self-awareness he had turned into a complete tool.

Seasonal sports award observer, The Bravery said, “it looks as though Lewis will once again miss out on the essentially meaningless annual couch potato poll.” 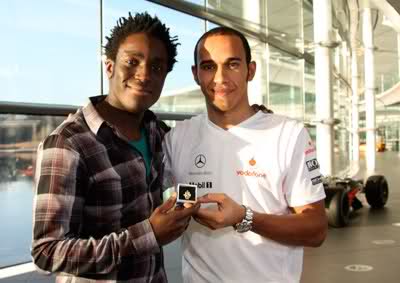 “But whereas in the past a Scotsman with big thighs or British sports fans’ lingering casual racism could be blamed for the incessant failure, it looks like his own inherent dickishness is the thing holding him back this time.”

The Mclaren driver was favourite going into both the 2007 and 2008 competitions yet lost out to a man paid to punch people in the face until they fell over and another man advertising roughage to make ends meet.

Defeats which were far more shocking than they would be now the Mclaren driver has fully metamorphosed into the dreary Kanye West wannabe cockwand he is today.

“4 years ago, coming second in a sporting popularity contest to a man with big fists and another with big legs was a shock,” lead singer, Sam Endicott continued.

“Whereas being trumped by that miserable Scottish bastard or the bloke with the facial furniture would be entirely predictable given Lewis’ current predilection for behaving like the championship he’s actually aiming at is world’s biggest bell-end,” he added.

Yeah, but Maldonado thought Les Miserables was good as well