The 7-Times Champion’s card and envelope has been circulating the paddock in recent weeks accumulating loose change and grudging words of thanks amongst the F1 community in anticipation of his exit at the end of 2012.

But recent ambiguous statements regarding the German’s intentions both on and off the track have seen card and envelope withdrawn from circulation and organisers cease emailing each other with links to lederhosen, beer steins and fake Nazi uniforms on Ebay. 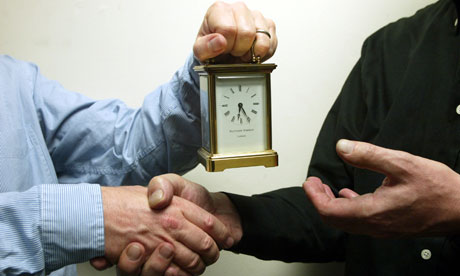 Collecting person Stacy Scheisthorn said, “we’re very disappointed in Michael right now. I started this collection in good faith he’d finally free up some space for a driver devoid of grey pubes but now he’s pissing on that faith before crashing into it at high speed.”

Schumacher’s comeback has stuttered ever since the Teutonic tit stepped back into an F1 car for the first time since he promised it was the last time he’d ever step in one again prompting speculation the German would promise to not step into an F1 car again once he’s stepped out of this one for the last time once more.

“At least one person is going to be severely disappointed his 20,000 Lira note was ever put into the envelope,” Stacy continued.

“And I’ve already had two ex-drivers asking if they can take back their half-hearted platitudes until there’s some sort of guarantee the bastard is actually going,”

“I tell you: right now, I’m this close to taking this hostess trolley back to Argos,” she added.