F1 BBC anchor Jake Humphrey is to go back to playing that prick from the BT ad.

The 33 year old was that twat for several years before moving to the BBC and announced his return atop his gold plated yacht, moored off the Seychelles.

“I’m really, really gutted about having to leave the BBC,” the boyish gonk told reporters whilst climbing aboard his helicopter, Friends and Fuck You Licence Payer! 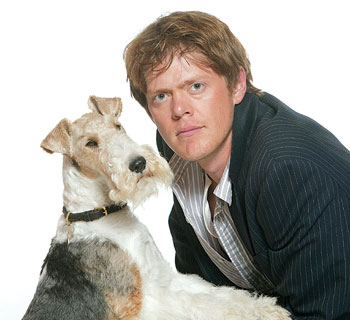 EJ now has to locate somewhere to shit by himself

“But the trouble is I wanted a bigger yacht with thicker gold plating and more diamonds on it.”

“Plus ever since Norwich City got promoted to the Premier League a season ticket has been astronomical.”

“Not that I’ve ever been to the ground: but I need to seem like the sort of bloke who’s into sport and drinking beer rather than one who carries a picture of his nan round in his wallet.”

BT ads have been an incomprehensible triumph for the communications cowboys ever since their first appearance in the 80s with the loveable dementia-suffering grandmother character, Beattie.

“Jake would have forever been the guy everyone remembered as that bloke from that ad,” media analyst, Grant Scrofula explained.

“But in 10 years time everyone will point at him and go, “look, there’s that bloke from that ad: didn’t he used to be on the BBC as well?”

“Which is an incredible achievement when you consider most people from Norfolk are ground down into bonemeal before they even reach their 12th Birthdays,” he added.

It’s thought Eddie Jordan’s handler position will now be taken by that dickhead from My Family.

Mclaren strategy, “now largely down to praying to the right God”