Nelson Piquet Jr’s spokesperson has only got time to clarify the dumbest thing his client just said.

Speaking out of a brain now ruined by 2 years of grits and moonshine consumption, the Crashgate culprit’s incoherent tirade was too wide-ranging and nonsensical to have all of it explained away so just the Senna thing would be addressed for now, being the one that could really fuck up his soft-drink sponsorship deal.

“My client is very sorry,” Wenlock Boner typed into an internet. 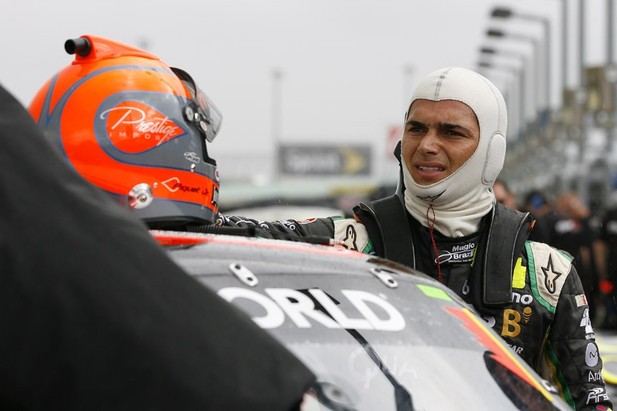 “He didn’t literally mean Senna wouldn’t win in contemporary F1 even though he did literally use those words in that order.”

“But until such time as we can figure out whether anyone still gives a shit about this next week, please accept his apologies and remember that all that F1 stuff was Flavio’s fault and how his tanned, boyish face is still framed by that really cute fringe.”

The 27 year old NASCAR driver was famously forced out of F1 in 2009 when it was revealed his then boss, Flavio Briatore didn’t understand what blackmail meant.

But 2 years of enforced redneck tin-top exile has sadly taken its toll on the 2006 GP2 runner-up who finally responded exactly like you’d expect someone who’d been baked into a family saloon and driven round in circles in front of amphitheatres of humans less intelligent than their own piss would.

“Whether we decide he was actually talking about Bruno Senna or was actually being disrespectful about the branded constipation cure nobody knows,” Boner added.

“But in the meantime, if you can just go back to your internet pornography or X-Box 360 I’m sure none of this will seem the slightest bit important by about next Tuesday.”

Not what it looks like, Todt announces from under desk