Damon Hill, Johnny Herbert and Simon Lazenby are itching to get back to work after the summer break now they’ve sorted out that rhododendron bush.

The topiary challenge was agreed by the middle-aged throttle jockey duo and perpetually squinting anchor during one of their many typically awkward moments spent waiting for yet another Santander commercial to finish.

“Damon was wondering what everyone was up to for the next 5 weeks,” Lazenby related. 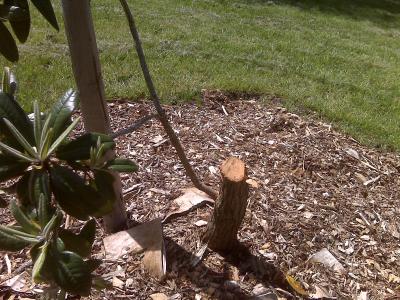 Have that, you bastard

“I told him I might go and do a bit of fishing though the wife had been going on at me for ages to sort the shed out.”

“Then Johnny said that he had this giant Rhododendron bush that needed cutting back and that was it. You don’t look a gift horse gardening challenge like that in the mouth; especially when it coincides with the B&Q sale.”

Rhododendron ponticum is a genus of over 1,000 species of woody plants in the heath family, which can be either evergreen or deciduous.

Displaying vivid purple spears between the months of May and August, Rhododendron bushes can be a stunningly colourful addition to any garden were it not for the habit of trying to burrow into your front room just as you’re settling down to watch Match of the Day.

Lazenby added into the wrong camera, “it was a hell of a job but we really pulled together and got it done. Plus, having spent time with them away from the racetrack I feel we know each other a whole lot more.”

“Johnny’s ability to grow top quality tomato plants from seed is a thing of wonder for instance whilst Damon’s knowledge of heritage sheds is equally impressive.”

“It’s that camaraderie that will just bring the whole show an added level of intoxicating excitement as we head into the remainder of the season,” he said to an audience now busy looking at something else.