Michael Schumacher’s comeback career is actually punishment for the earlier, more successful one, it’s been revealed.

The German’s 6th retirement of the season at the Hungarian Grand Prix followed a series of Magyar mishaps which included stalling on the grid, speeding in the pitlane, puncturing, attending a prestigious sponsor’s dinner in which his flies were undone throughout and having a tin of paint knocked onto his head whilst under a stepladder.

But karmic expert, Keith Druid said the 42 year old’s calamitous comeback was eminently explicable in the grand scheme of the Cosmos. 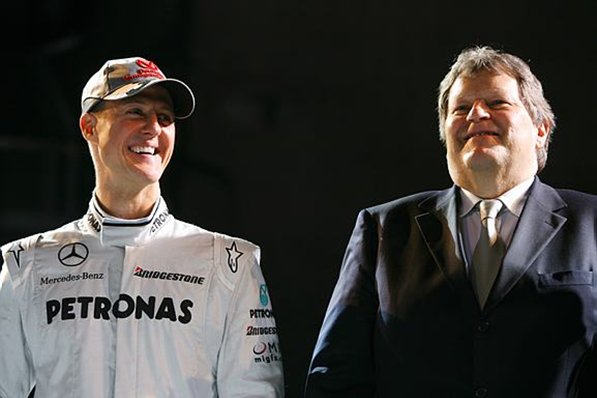 Do I get any time off for good behaviour?

“The mystic runes are unambiguous about this,” he told us, pointing at 7 dog-eared playing cards on some fish and chip paper.

“For all the driving misdemeanours he’s committed and for making a Brazilian cry, Michael has to do penance in this world or the next.”

The 7 time champion’s mind was made up on the karmic conundrum not by concerted Mercedes lobbying but by the disembodied materialisation of the Norse God, Wodan.

“Michael always knew what he’d done was wrong; so his visitation by a gigantic Viking-era apparition during an otherwise perfectly pleasant dream about being the David Essex character in Silver Dream Machine, could hardly have come as a surprise,” Druid continued.

“A long-term Mercedes contract was obviously the mortal equivalent of burning in a lake of fire whilst having his eyes eaten out by rats in perpetuity.”

“It’s early days yet then but ultimately he’ll only know at the end whether he made the right call,” he added.

Caterham unsure what twice fuck-all is