The error was pinpointed when attempting to use the same company’s Excuse-Ometer ™ program which converted Christian Horner’s normal speech patterns into a needlessly confrontational bluster of mealy-mouthed bollocks. 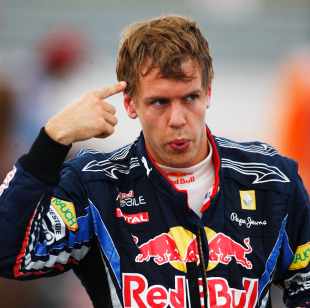 Investigative journalist, Chaz Boondocks said, “Red Bull are lucky to have caught this when they did.”

“If those algorithms had been allowed to carry on unabated the torque settings would have been off the scale and Seb would have thought it perfectly okay to overtake by driving into another country and staying there indefinitely with his family and friends until the FIA agreed the move was legitimate.”

“Under the strict norms provided by the FIA’s technical rules, our programs have operated entirely legally and these sanctions are therefore politically motivated,” software house spokesperson, Dana International told reporters.

“And even if that isn’t true we have a 4,000 year old fairy story that says it is, so there,” he/she continued.

The team will now amend both engine and driver settings in time for Hungary using software supplied by a nation with a less controversial attitude to issues of territorial integrity .

“Yee-ha!  Yippee-ya-kay and a rootin-tootin yoo-hoo to you two!  Who we invadin’ next?  I heard Cuba was mighty purdy this time of year!” replacement software company MD, Lee John-Joe General Lee Majors Jnr III told reporters.