After Andy Murray’s successful deployment of the re-branding strategy at the Men’s Wimbledon Final, Paul di Resta is to begin lessons in how to cry.

Having not been allowed to win again, Murray’s tearful tennis tantrum galvanized support from a crowd previously given to thinking they were backing the racquet wielding robot only because he was built by a group of engineers sharing roughly the same landmass as them.

And facing similar personality challenges with their Force India client, the Scot’s new management team sensed a chance to at least sell a few of these fucking hats they’ve got clogging up the warehouse and decided to leap aboard the blubbing bandwagon. 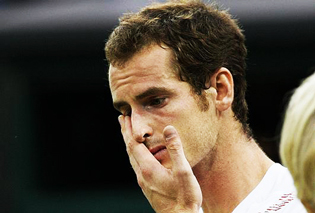 Ahhhh….did the nasty man get the ball into the squares more than you?

“Basically, if you’re not Scottish or clinically dead you’re unlikely to have any merchandise with his name or number on it.”

“In fact, you can’t even buy anything with Paul’s picture as it was found in experiments to attract torrential rain,” she added.

“We will begin by doing basic physical sad-face exercises augmented through the attachment of increasingly large weights to each corner of his mouth ” media consultant, Max Clifface explained.

“Then we’ll work on his psychologically conditioning; asking him to imagine upsetting scenarios such as his porridge running out, cat getting ill or the team wanting him to be interviewed by Eddie Jordan again.”

“Ultimately we want Paul primed like a water pump. If he so much as spots Lee Mckenzie we want him practically pissing tears at the lens,” he added.

“Honestly, you have no idea what storage costs these anoraks generate.”

Maldonado to up crashing game in Austria