Lewis Hamilton’s future wages will depend on whether he can get his girlfriend to stop singing.

The 2008 World Champion was informed of the Mclaren team’s demands earlier in the week, arguing that ever since his ethnicity stopped becoming a talking point, sponsors have found it harder to convince pricks he was any edgier than the one their mum likes with the clean, dandruff-free hair.

Faced with a warehouse full of silver puffa jackets and Vodafone diamante ear studs therefore, the Woking squad figured the financial write off would be easier to swallow without having to listen to any more Pussy Cat Dolls solo output. 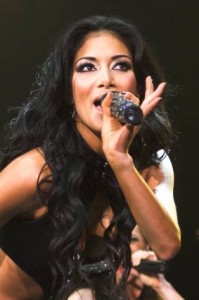 “5 years ago – inexplicably – we could have shifted this shit 10 times over thanks to the urban cache Lewis brought us,” Mclaren chief Martin Whitmarsh told reporters.

“But now he’s safer than Alan Titchmarsh at a Guildford Waitrose branch opening we need him to do more than have Kanye West’s phone number in his Blackberry to justify our Santander overdraft.”

Scherzinger, described as ‘sexy, original and powerful’ by Malkikka333 on Amazon and, ‘with a voice like 3 women trapped in a falling lift’ by everyone else, still poses considerable trilling threat and her silence could be a powerful weapon in her partner’s salary negotiations.

“Since Lewis started sulking and crashing into everyone I’ve grown less enthusiastic with him at the same rate as for this diamond stud earring I had done never mind my tangerine Vodafone vest,” fan Quentin Fists said.

“Don’t get me wrong: I like Lewis. But I’d like him more if he can get that claymation lesbian wet dream off of my radio.”

“I might even get the other ear done. Or at least take out a Santander 123 Saver account: apparently it’s got quite a good short term interest rate,” he added.