Spain’s evil money spirits have been thwarted thanks to Fernando Alonso, the country’s head wizard has announced.

The 31 year old’s stupendous drive at the European Grand Prix and subsequent prostration before the main stand, Spanish flag spreadeagled, absolved the country of its credit sins and set it on a new path to prosperity. 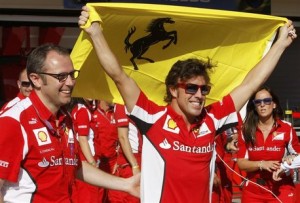 Go back to your apartments and prepare to spend

“But it was his text book genuflection due East to the great God of Finance, Eurogedatrix that ensured all Spanish debts have been dissolved and our country now possesses a clean credit history,” Carlos the Magnificent, née Garcia explained.

Spanish pauper San Sebastian San Salvador said, “we did not understand why Eurogedatrix was so displeased.”

“The ruin that happened afterwards is therefore cruel and incomprehensible to us. Sort of,” he added.

But Fernando’s assuaging of the capricious credit deities means all that has changed and Spain can look forward to a prosperous future full of fat tourists and fatter wallets.

“Everything is fine now and we can spend what we want,” Spain’s Finance Minister announced.

“Though if you don’t mind, please don’t tell Germany about it: we want it to be a nice, err: surprise,” he added.