Venezuela is bracing itself for the world’s population to suddenly rock up on its doorstep unannounced, writes our developing world sightseer correspondent, Alan Wicker-Basket.

Crossing the finishing line in joyous celebration, Pastor Maldonado’s victory at the Barcelona Grand Prix sent his normally nonplussed countrymen into a petrol-fueled patriotic frenzy; rushing onto the street in droves to find someone who knew who this funny looking bloke was again.

But that’s as nothing compared to the anticipated mental state citizens of the country’s appropriately named capital Caracas will reach, once millions upon millions of the world’s population have noticed all the stickers on the winners’ car, telling them what country he lives in. 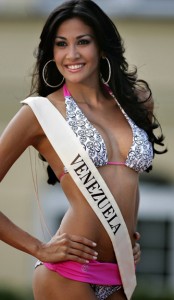 “Pastor is now a complete hero to every single man, woman, child and Turpial in Venezuela,” Minister for Tourism, Hector Rebaque told reporters.

“But smearing our country’s name over a Grand Prix car wasn’t supposed to do anything: it was just some convoluted dodge Mr Chavez came up with to avoid paying tax on all this oil we found.”

“Pastor wasn’t supposed to actually win a race  but now he has we’re shitting ourselves the world and his wife are on the next flight to check out our world famous Angel Falls, Caracas’ Teresa Carreño Cultural Complex or view some of our 1,417 species of bird in one of our beautiful and mysterious cloud forests,” he added.

The alleged 24 million quid a year the Venezuelan’s government sent Frank Williams’ squad to publicise its ability to spend 24 million quid publicising itself proved controversial when it was revealed the country was quite poor and run by a partially unhinged walking dead guy.

But Maldonado’s victory immediately changed that impression as billions of people made immediate holiday plans based solely on the nationality of a bloke with a speech impediment finishing ahead of 23 other blokes at a car race.

“We’re not sure if people are going to come because they want to see where Pastor hangs out or they just like the sound the letters make in a word they’ve never heard before,” Rebaque continued.

“But come they will.  They’d better: we’ve had the carpet cleaned at the airport specially and Hugo’s new wig isn’t cheap either, I can tell you.”

“Did I mention we’ve got Capybaras as well?” he added.