Michael Schumacher is wondering whether he has entered the penitent realm of purgatory as a result of previously committed driving sins.

Forbidden from claiming his first pole position in nearly 6 years at the weekend’s Monaco Grand Prix, the Teutonic multiple champion became concerned that, far from it being a legitimate penalty incurred through committing a driving misdemeanour at the previous event, together with his 4th retirement from 6 races, the misfortune reflected instead a sustained form of punishment being directed by higher powers.

“Michael hasn’t yet decided whether he is succumbing to the Brahmin-inspired concept of Karma or is actually dead and this is an elaborate manifestation of the Catholic notion of purgatory,” his fitness instructor explained. 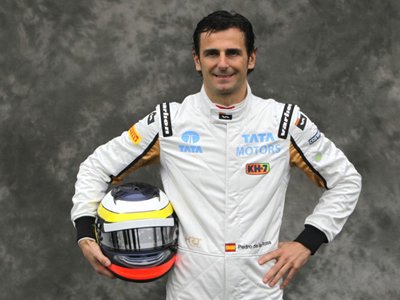 You can’t even imagine what this man did in a past life.

“Either way, it’s not what the bookies envisaged at the beginning of the season when he was 11-1 to be champion,” he added.

Karma concerns the totality of an individual’s actions reaping concomitant reactions, thereby determining the protagonist’s future and is an important bullshit tenet of many far and near eastern religions such as Buddhism, Sikhism and that one Madonna does, probably.

Purgatory on the other hand, is where the individual post-death is tested and judged by his previous actions as to his suitability for the kingdom of heaven and is hence, if anything, marginally more insane.

“Michael acknowledges that there were one or two or several or quite a few actually moments where he maybe on balance overstepped the mark on driver etiquette and inadvertently entered the realm of unhinged vindictive lunacy,” the trainer continued.

“But come on:  he’s only driven 3 World Champions and his brother off the road.  Twice.  What does he have to do?”

“Fuck me: anyone else would have signed this years ago, what do I have to do?”, said God, holding a “Dear Rubens, I’m really sorry for absolutely everything”, letter.

Opportunity to properly ruin Hartley too good to turn down, says Marko