The new HRT base feels really welcoming thanks to getting these shelves up promptly, boss Luis Perez-Sala admitted proudly.

Criticized for failing to attend the only F1 test of the year having already been late introducing their new F112 car, the Spanish team chose instead to make a real go at knocking their new place into shape rather than have packing crates and piles of books littering the corridors for weeks on end.

“It was really tempting to take the opportunity to test at Mugello and try and get our car closer to the guys in front,” the mid-80s back-of-the-grid trundler explained. 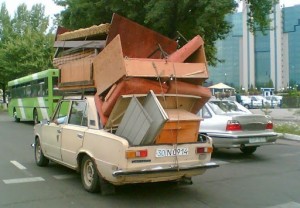 Downforce has been an issue all year with the team

“But on balance I think we made the right decision ensuring all the cardboard boxes had been emptied, the cutlery put in the right drawers and the DVD’s placed on the shelves in alphabetical order rather than – say – make a really solid attempt at improving the one thing that justifies our very existence.”

For the remaining teams, testing at the North Italian circuit last week was a Godsend; whether to tweak set-ups, hone ingenious, rule-bending developments or as a desperate, last-minute exercise hurling as many new parts as possible at the piece of shit car you’d trumpeted as daring and innovative but which turns out to be an total dog we’re sorry to say, Mr di Montezemolo.

“I’m absolutely certain it was the right thing to do,” Perez-Sala continued.

“We’ve even had time to hang the pictures up and switch our gas and electricity to a more eco-friendly supplier.”

“You can’t underestimate the positive benefits of living and working in an environment you’re comfortable and at home in.  Plus it’s never nice to have the place in a mess when the bailiffs come round, is it?” he added.

Not you, it’s me says Alonso