Announcing their engagement, Ecclestone told the Daily Mail he was very happy at the prospect of tying the knot with the much, much younger Miss Flosi to which the much, much poorer Brazilian agreed wholeheartedly.

But relying on the 81 year old’s imminent demise from a massive coronary to avoid having to go to bed more than at least once with the wrinkly shitbag was a plan doomed to failure, furred artery experts have warned. 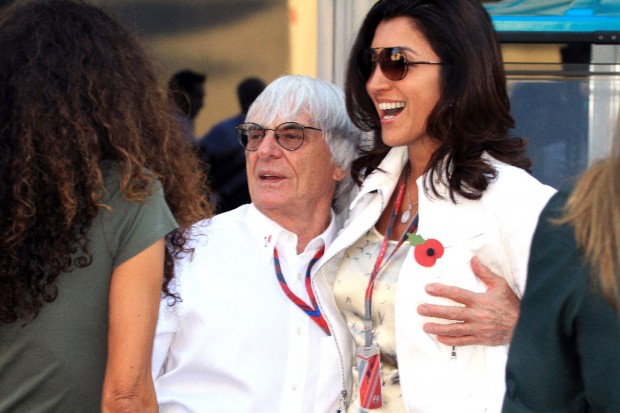 “Assuming Bernie is going to pop his clogs at any second what with his age and rushing about all over the world every 10 minutes is deeply problematic,” heart surgeon Mitch Airwolf explained.

“For one thing, there’s no outward sign he is slowing down at all,” he commented.

“And for another – based on all the available evidence – it would appear Mr Ecclestone has a lump of coal where the thing that’s supposed to pump blood round his body should be.”

The vital organ expert went on to describe the likely impact this might have on those nearest the titchy shit.

“Basically, he’s never going to die. Ever. Which is a bit of a pisser if, like the rest of us, you’d quite like him to.”

“If I were Miss Flosi I’d better get used to waking up to the cackling little money-dwarf for the rest of my life because those 2 dead eyes under dandelion fluff is what she’s going to be waking up screaming next to every day till she finally gives in and puts a gun to her head.”

“I’d give her to about Christmas,” he added.

Heartless bastard experts later admitted however, there was still a slim chance the 36 year old might yet profit from afflictions other than myocardial infarction.

“It’s not the end of the world,” commented one.

“Though if my understanding of the evil dimension Bernie fell through is correct, that might be the only thing that would do it.”

“I must admit: Armageddon or Bernie. I’m glad I don’t have to make the decision,” he wondered.

Mclaren verdict in: team to be “tagged” says FIA