A wheezing, unemployed layabout still believes in the impossible so long as Rubens Barrichello does, writes our deluded shirker correspondent, Mike Berry-Buck-Mills-Stipe.

With multiple convictions for shop-lifting and affray, 47 year old unemployed Mitchell Guts had long since given up his dream of becoming a World Champion racing driver or football player or something like that, especially once diagnosed with Type 2 diabetes whilst undergoing routine tests on a long-term serious liver complaint.

But an interview featuring recently-not-Indycar Indycar driver Rubens Barrichello in which the Brazilian announced he hadn’t fully given up his dream of being a former F1 driver only once he’d decided, gave fresh hope to the divorced father of at least 2. 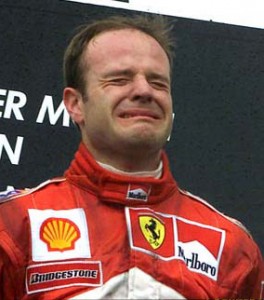 Now you know how we feel

“I was always optimistic I would get a chance to compete at the top table of world motorsports,” former Wandsworth inmate 2013487 told us.

“Or – you know – play for Real Madrid or beat Ivan Lendl at Wimbledon or something like that.”

“And I must admit; once I got done for handling those knocked-off laptops I did wonder whether it would have to be something that – however reluctantly – got filed under, ‘what might have been’,” he admitted.

“Along with living the rest of my days in the Playboy Mansion and being able to fly like Superman.”

“But once I read Rubens still harboured hopes he too could return to F1 I knew I still had a chance. That was when I stopped what I was doing, pulled my trousers up and fired up the PS2,” he explained.

Extremely competitive times on Grand Prix Legends 2004 underlined the overweight, insulin-taking former lorry driver’s childhood conviction he had what it takes; together with a single fair-to-middling performance at Brentwood go-kart track and a low-level, persistent Aspergers-like condition.

It was Barrichello’s pronouncement of unfinished F1 business however, that re-ignited the fire first lit when he was thrown out of the Under-16s B team for rifling through his fellow players’ bags during an Essex Schools Cup football match, reducing him to endless games of Revs on his brother’s Commodore 64.

“I’m really up for this,” he exclaimed.

“It would be my life’s ambition and if Rubens can do it, I can do it.”

Schuey castigates Alguerasari Oz tactics: “when I was his age, I’d have driven me off the track”, rages ex-champ