Bernie Ecclestone has expressed concern that the traditional values of F1 are being threatened by the increasing involvement of outsiders called, “women”.

Speaking from in front of an invisible burning country, Ecclestone was giving his first official reaction to the Williams team’s hiring of Susie Wolff as development driver, rather than telling everyone what he thought about the crispy barbecue smell being generated by an angry, gesticulating mob behind him.

“I think it’s very sad,” he told reporters above the din of rubber bullets and detonating tear gas cartridges. 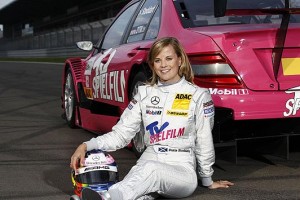 Her husband has a blue one

“Here we are in 2012 and instead of congratulating ourselves on what has been a really super, exciting season we’re in danger of ruining it by focusing on trivial things that really shouldn’t have anything to do with Formula 1,” he said, just as some non-trivial things began running battles with heavily armed security personnel.

“Now this girl’s become an unwanted centre of attention when if they’d just let her do what she wanted to; settle down, have children, get her hair and nails done, none of this media nonsense would have happened,” he added; a Molotov cocktail narrowly missing his right ear.

Wolff – who confusingly, is not a real wolf – hit the headlines last week when the Oxfordshire squad announced it had hired the mediocre-at-driving DTM pilot to do something hopefully a bit better than that in their video game department.

“I am very pleased to be doing this car pointing thing,” Ecclestone imagined her scrunched up adorable little face giggling, before thick, manly arms arrested a certain tumble from the podium due to her impossibly high heels.

“It’s what I’ve always wanted to do after wearing pretty clothes and making babies,” she added before breaking down in tears and telling everyone she was sorry it was just that awkward time of the month when everything’s a bit overwhelming *down there*.

“The sooner we get over this silly notion women should be allowed anywhere near the grid in anything other than a bikini, the quicker we can get back to the proper business of F1: making me as much money as possible,” he added, stepping over the lifeless body of a teenager clutching a bloodied placard.

Vettel to use Force in run to first corner, going forwards