“I was just popping out of that week’s name change conference call to re-fill my hip flask when I stumbled on some Eastern European women in the foyer,” he told us. 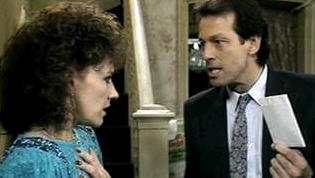 “Obviously, I wouldn’t normally fraternize with anyone in the team outside the Board, but a smattering of conversational Bulgarian from my gap year in 1987 was all I needed to comprehend the frightening  implications of what they were saying.”

He went on to describe a plot straight out of a movie: if the movie were filmed as cheaply as possible over regular 30 minute episodes for 2 years in a car parking lot off a Freeway in California.

“So these 2 blokes built like brick shithouses – Cole and Dirk – are in love with this woman Tiffany, who lives in a swimsuit. Cole eventually wins the girl which makes Dirk really bitter.”

“But then Cole suddenly falls in love with someone else – basically a cheaper, dirtier version of the same woman – so tells Dirk he can have Tiffany after all.“

“Except that Tiffany then decides she didn’t love Dirk anyway and runs off herself: though not before reminding him that if he doesn’t keep up payments on the mortgage of the house he’d lose not just her but the roof over his head when she forces the bank to foreclose.”

The parallels were terrifying, he reported.

“Cole is Caterham, Dirk is us and Tiffany is Group Lotus: it all fits.”

“Basically we’ve just bought the box set from Amazon and are ploughing through it now.”

“Even the Sutil GBH thing is in there though we initially missed it as Adrian’s character was a tennis player called Tyus, the night club a UFO and Eric Lux a shape-shifting alien called Gemini played by Stephanie Beacham or David Hasselhof depending on which day you were watching.”

He went on to add that the storylines of most concern to the team were the one where an alcoholic serial killer wreaks revenge in the local garage and a crooked finance scheme that costs the town’s Transexual smack addict her mixed race baby, fledgling nail bar business and best friend’s love and flexible loan guarantee.

Sunset Beach is available on DVD from Amazon or a hyper-sensitive Lotus executive whose nails have been bitten down to bloodied stumps outside the back of the team’s AV suite.

That’s it! FOTA and FIA to meet at bike sheds after school