Somebody at HRT has left the fridge door open or grill on or something so we’re all going to have to go back and check rather than go to Mugello for the F1 test, a team spokesman has announced.

Attempting to juggle 2012 season commitments – new regulations, drivers and the usual complicated global travel itinerary – at the same time as moving their company address has taken its toll on the Spanish team such that those classic travel precautions like remembering to turn the lights off, unplugging the video recorder and giving the budgie to a neighbour were bound to be forgotten, claimed Formula 1 removal experts.

“Obviously, we would dearly love to burn through about a quarter of a million dollars shipping people and equipment all the way to Italy to figure out we’re in exactly the same place we were in this time last week,” boss Luis Perez-Sala told journalists. 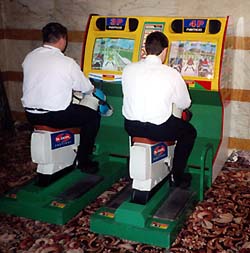 “But unfortunately, when we were nearly halfway to the circuit, one of our staff realised they couldn’t quite recall whether they’d unplugged the kettle or not.”

“Given the potential disaster of leaving such a situation unchecked our responsibility has to be to return.”

“I mean: it’s probably off. He’s pretty sure he turned it off but he can’t quite remember so – you know: what can you do?”

“Plus a couple of the others weren’t 100% sure they checked the grill or the toaster: basically, it’s better to be safe than sorry, isn’t it?  Have you seen what our electricity bill is each month?”

The Spanish team have had a disappointing start to the 2012 season compared to their rivals or sort of the same old shit if compared to just themselves.

But whilst all the other teams have stressed the need to improve their cars via the testing of upgrades at the Northern Italian track this week, the Madrid outfit will have make do with their simulator instead.

“The simulator? Shit. I knew we’d forgotten something,” Perez-Sala exclaimed, ordering the convoy of 3 cars and a 5 year old leased transit to double-back at the next motorway exit.