The Bahrain Grand Prix should be allowed to go ahead lest the universe descend into a hive of scum and villainy, writes our galactic hokum correspondent, Denton Wookie.

Increasing tensions within the Middle East Kingdom over recent weeks has put pressure on the organisers and FIA to cancel the country’s Grand Prix amid concerns for F1 personnel and spectator safety, never mind Tamara Ecclestone’s difficulty in getting blood out of her wardrobe.

But wizened dwarf-mage Bernie Ecclestone has warned against playing down the positive impact the country’s Sakhir Circuit can have on the apparently warring populace. 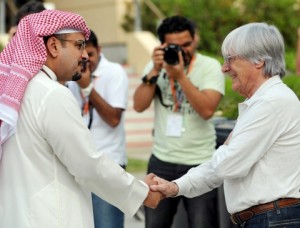 Now *I* have the Mastercard

“Do not under-estimate the power of the course,” the coin-operated billionaire rasped at an audience of cowed journalists.

“Formula 1 is the only way of bringing peace and prosperity to such troubled worlds: the concerns of a few protestors are insignificant compared to the power of F1.”

The tiny rights emperor went on to explain how Formula 1 was often overlooked as a force for good by listing its historical emancipatory achievements.

“It’s a well known fact we went back to South Africa in ’93 and they had multi-racial elections the following year.”

“Hungary was a Communist dictatorship before Nelson [Piquet] won the event in ’86; a democracy a couple of years later.”

“And you try and tell me the end of racial segregation in America didn’t have anything to do with Watkins Glen, Sebring or that Las Vegas car park,” he added.

Formula 1 was clearly not used by oppressive, dictatorial regimes to cover up appalling atrocities and injustice, project false senses of peace and harmony or crack down violently on internal dissidents using state-sponsored violence and torture, therefore.

“Just don’t come running to me once you’ve denied all my best billionaire bedsheet-wearing friends their only – alright, only one of two – opportunities a year to show off their cars, wives and watches to the rest of the planet,” Ecclestone continued.

“I mean: look at what happened when they cancelled the German race in ’39: coincidence? I think not,” he added.