A series of divine administrative errors meant a prescribed plague of frogs at the weekend’s Bahrain Grand Prix had to be replaced at the last minute with standard water-based precipitation.

Looking upon His subjects during the controversial event; vain, seduced by power, corrupted with trinkets and money, inured to injustice and misery – especially this tiny old cunt with the glasses and the hair – Yahweh grieved at the wickedness he had begotten, declaring He would send a sign indicating His great displeasure at such sinfulness.

“I am aghast that man has compelled this folly,” the omniscient being commanded unto a select band of followers and apparent lunatics.

“I the Lord has spoken; judgement is coming and I will act! Behold, I will smite the land with frogs that man will know My righteous fury and turn back from this wicked path! Especially that fucking awful midget,” he explained with fearful portend. 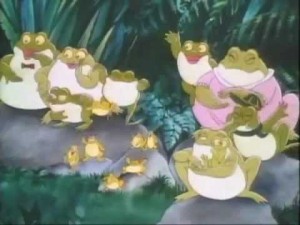 The resultant intermittent drizzle dampening the circuit for a mere 20 minutes was of considerable surprise to both attendees and the Lord therefore, given the anticipated amphibious deluge.

“Unfortunately, the Supreme Being forgot that any kind of Almighty judgment expressed through unnatural phenomena has to come through me,” Divine Retribution Implementation Manager, Roy Foxgloves explained.

“He may well be omnipotent in time and space but He does need to remember that we have these rules for a good reason.”

“Having said that, we haven’t had one of these since the time of the Pharohs so let’s just put it down to a bout of forgetfulness on behalf of the Lord,” he added.

The apparent absentmindedness comes at a bad time for the Creator who has seen church attendances plummet in recent years following revelations He might just be a figment of man’s need to give meaning to humankind’s ineffable existence.

“I’m sure if He follows correct procedure next time, He can have as much plague and pestilence as His Almighty can bring forth from furious anger but until then I’m afraid, rules is rules,” Foxgloves continued.

“After all: He did write them so He can hardly complain when we uphold them!”

Foxgloves department’s planned smiting with fire and brimstone was later cancelled when the recipient of celestial righteous fury was found to have had his age entered incorrectly on the necessary form.