The more-incarnations-than-Dr-Who squad wowed every member of the F1 paddock prepared to pretend they knew what they were talking about, when detailed photos of the team’s new bodywork revealing various unusual slots, cubby holes and unorthodox-shaped carbon fibre pointy bits suggested something revolutionary was going on with their latest car.

But despite attempts to explain what could be going on using detailed technical drawings festooned with different coloured arrows pointing out airflow movements, dynamic environmental influences and air pressure fluctuations, most people have now thrown in the towel attempting to figure out what the fuck is going on.

“Mercedes look like they have come up with something very, very clever,” F1 technical expert, Keith Motion told us. 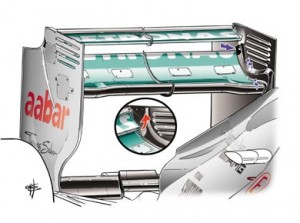 Push tab A into slot B and err….fuck it

“In fact, it’s so clever I haven’t got a clue what it does. It may as well fry chips or create sound frequencies audible only to greyhounds: I’m fucked if I can figure it out, that’s for sure.”

Speculation regarding the Stuttgart-based squad’s innovative aerodynamics first began in 2011 when motorsports journalists found staring at photos of holes in the Mercedes bodywork was considerably more interesting than the unfolding season.

Conjecture that became even more acute when the team took its 2012 challenger to Melbourne and beady-eyed, amateur aerodynamicists returned to the subject given 500 words of copy to write and a deadline threatening their already restricted time at the bar.

“There’s a flap at the back. It opens with the DRS engaged…I think and then err…they get to 88mph and…err…can I get another single malt please barman?” a journalist told us.

“Clearly this is the work of some sort of alien intelligence,” Motion continued.

“I mean: have you seen Ross Brawn? He’s not fucking human is he?” he speculated.

It’s thought that the system will be discussed ad nauseum until it becomes clear it has absolutely no bearing on Mercedes being successful or not at which point the paddock will return to more pressing matters such as Lewis Hamilton’s girlfriend, Jenson Button’s girlfriend and Sebastian Vettel’s finger.

Mclaren strategy, “now largely down to praying to the right God”