Felipe Massa is to be replaced by one of those cymbal bashing toy monkeys you see on the ground floor of Hamleys department store, writes our substitute pilot correspondent, Jez Carvery.

The 30 year old Chuckle Brothers emulating Ferrari pilot’s days were already thought to be numbered even before the opening race of the season in Melbourne.

But this was before the Brazilian proceeded to pick a fight first with his car and then fellow countryman Bruno Senna; prematurely ending the race for his fans and not before time for everyone else who’d spent the previous laps peering aghast at the screen from between ever narrowing fingers. 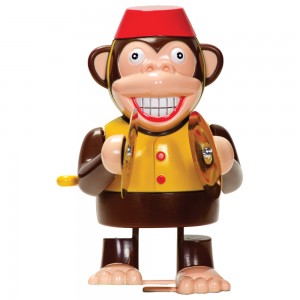 Wind him up, set him off.  The opposite of his predecessor, basically

“Felipe has been a loyal servant for Ferrari for many years but it’s time he was replaced with something more likely to be of positive service and/or less work for the mechanics,” Stefano Domenicali told circling notebook-wielding vultures.

“I am therefore proud to announce that with immediate effect, The Amazing Charley Chimp™ is now Scuderia Marlboro Ferrari’s number 2 driver for the rest of the 2012 season.”

“Not that we ever had a number 2 driver in the first place,” the Italian team chief continued.

“So you can forget about creating your cheap, sensationalist headlines by stuffing my mouth with outlandish, made-up quotes you know full well, I have never said.”

The mechanical simian automaton is operated using a one inch long metal key and can keep oscillating from foot to foot, rhythmically bashing a pair of gold plastic cymbals for up to two and a half minutes prior to grinding to a halt due to the gradual atrophy of stored kinetic energy.

“Charley looks like an excellent addition to the team,” Ferrari CEO, Luca di Montezemolo told everyone.

“He keeps excellent time, is cheap, cheerful and – ultimately – causes less damage than Felipe who I imagine we wish all the best to, probably,” he said, swishing his hair about in flamboyant fashion.