Fernando Alonso’s novelty plastic sunglasses switch prior to his Malaysian Grand Prix victory has prompted his Ferrari team to shift their immediate development priorities to locating a lucky wardrobe.

The Maranello concern’s return to the winners’ circle at the weekend coincided with a chaotic race in changeable conditions and the adoption by its lead driver of the sort of eyewear last seen in the video for the 1979 Buggles hit, “Video Killed the Radio Star”.

And though the Spanish driver’s controversial selection of the Oakley Jupiter Squared model in Matte White, with black trim was not initially believed to have had any influence on the final result, his desperate Italian straw-clutching team had other ideas. 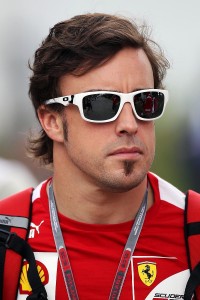 You should see the lucky hat

“This result was a great triumph for Fernando’s unique skills, the team’s ability to react positively in adversity and a clothing selection furnishing the wearer with a cloak of outrageous fortune,” Ferrari Team Principal, Stefano Domenicali told reporters.

“In light of this discovery and bearing in mind we no longer have enough time to improve the car to a point where Felipe won’t start crying every time he looks at it, we have therefore decided to switch all our development resources toward the correct selection of flukey Ferrari garments.”

The entire team then immediately decamped back to Italy for an almighty rummage amongst old boxes of Schuey-era polo shirts, Hilfiger-embossed Ferrari Y-Fronts and ghastly shiny puffa jackets in the hope one of them may be sprinkled with enough magic lucky dust, the upcoming Chinese Grand Prix won’t go down in the team’s folklore as a pseudonym for excruciating water torture.

“This is classic Ferrari strategy,”  analyst Spondulik Crispbreads told us.

“In the sense that no strategic thought has gone into it whatsoever with all logic being sacrificed in favour of a reaction based on panic, voodoo fantasy and superstition.  Having said that,  it was either this or burning Pat Fry in an enormous wicker Marlboro box so you’d have to say it’s a broadly favourable response,” he added.

It’s thought that the spawny wardrobe strategy will only work on Alonso’s car as the amount of good fortune required to get a similar result for team mate Massa would involve sucking all living fluke out of the universe which would then simply be impractical to try and squeeze onto a shoe, balaclava or set of matching cufflinks.

Opportunity to properly ruin Hartley too good to turn down, says Marko