Mclaren have confirmed they will revert to the tailoring skills of adults for this year’s flame-proof billboard romper suit collection, writes our fashionable racewear correspondent, Tiffany Bapsweet.

Mclaren’s underwhelming 2011 season was otherwise enlivened for millions of unfashionable, colour-blind viewers by a series of increasingly garish race suit designs worn by drivers Lewis Hamilton and Jenson Button, apparently not under duress.

The outfits, created in a laboratory by short-sighted juveniles high on Tartrazine and other banned E-numbers, resembled a powerful electrical current passing through a vat of raspberry ripple ice cream when not looking like a flock of parrots getting together in a carefully controlled explosion. 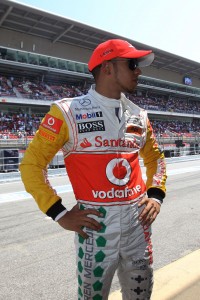 If you don’t want to know the contents of your breakfast, look away now

Mclaren eventually decided to call a halt to the disadvantaged Woking youngsters scheme however, once the number of summons threatening legal action for the involuntary dislocation of dropping jaws reached unsustainable levels.

“There’s only so much visually incoherent stimulus a person can take before even his own guts tell him to look away or something like the end bit of Raiders of the Lost Ark will surely happen,” fashion designer Robin Askwith-Fatwah commented.

“And if at the same time as the attack of nauseous dyspepsia he is also coping with the agony of his jaw having involuntarily detached itself upon facing your carefully honed aesthetic shitstorm you are heading for a potentially ruinous series of litigations.”

“Or what we in the business refer to as a, “brand malfunction“”, he added.

The new Mclaren designs, to be unveiled at the opening race in Melbourne this weekend, are expected to revert to the usual painter-and-decorator chic template whilst simultaneously cajoling you to bank, call, wear, drive around in and fill up with some old shit or other.