Spaniards have been flocking to the Jerez motor racing circuit in the south of their country upon hearing rumours a fellow citizen would be demonstrating his paid vocation.

Despite having nothing better to do, the plucky unemployable Iberians braved freezing conditions; flooding through the gates of the Circuito de Jerez when rumours first began circulating there would be a Spanish bloke there getting a paycheck.

“The second I heard a countrymen earning an actual wage was coming to my home town, I rushed to the circuit,” Diego Garcia Paella Por Favor told us. 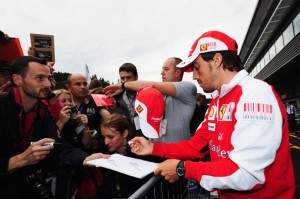 “Who do I make this benefits cheque out to?”

“Which, considering I now live 400 miles away in Madrid is saying something.”

“Despite living off nothing but olives and horse meat since 2011 I felt compelled to hitch-hike all the way here via 4 refrigerated container lorries.  I didn’t want to die without first catching a glimpse of a compatriot in paid employment.”

Fernando Alonso, the joyful focus point of the country’s populace, has been hired to drive an Italian car as fast as he can around the globe in order to sell more cigarettes and status anxiety to the Asian sub-continent.

“I am very proud to be representing my country at providing a good or service with sufficient competence such that a separate, solvent entity considers it propitious to offer a monetary reward in return,” the Spaniard announced on Twitter.

“Through hard work and with good fortune I hope to inspire others to realise Spaniards can do more than just play tiki-taki football, gore male cows to death and erect half-finished apartment blocks all over the country on previously unspoilt coastline.”

It’s believed HRT – the alleged Spanish Formula 1 team concern – were shunned by the same patriotic public because their entire operation is funded by Ocean Finance and anyway, are frankly a national embarrassment.