Blind faith in the unproven hypothesis Red Bull won’t be able to come up with the best car for the 3rd year running has enabled the F1 media to narrow the Milton Keynes based-team’s advantage for 2012.

Following 2 tests at which all the major players and Lotus drove round and round in circles in an attempt to set the most disingenuous lap times of the winter, pundits were united in their belief that Red Bull couldn’t possibly be about to piss off the viewing public as much as last year, surely?

And as various hacks hurried trackside to scrutinise mid-corner oversteer, gauge fuel levels and compare tyre compounds, the rest returned to their word processors between cobbling together dubious expense claim forms to write 500 words about why everything would definitely be a lot closer this year. 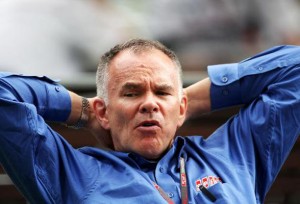 “These days, gauging everyone’s relative speed in testing is as much an art as it is a science,” journalist, Chesney Pencils told us.

“So with that in mind, I’ve decided not to bother looking at the cars on track much and stay in the warm of the press centre desperately staving off my hangover with endless cups of strong coffee and writing stuff about why Red Bull aren’t as good as last year or Mclaren are better or whatever seems to be the most plausible scenario that vodka-hazed morning.”

And with neither of the faux-trendy, fizzy drink backed cars topping the time sheets over the course of the Iberian tests, the credibility of the competitiveness quotient increase hypothesis began to take on the form of something that almost ceased to sound like pure, trumped-up bullshit.

“Force India, Williams and Sauber setting preposterous lap times was a breath of fresh air for both the upcoming season and my impending deadline,” Pencils continued.

“Especially because now nobody knows what the fuck is going on so I can write any old shit about Williams being a dark horse – again – Ferrari being shit – or good, depending on what day of the week it is – and why Red Bull won’t be as dominant even though I’ve just put last night’s entirely legitimate client entertainment bill on Seb to be a triple world champion come October,” he told us whilst staring at his Twitter updates.