HRT’s failed crash test may just have been a cry for help, car-psychosis experts are speculating.

The Spanish tuggers’ latest back-of-the-grid mobile chicane was due to take part in the next scheduled Formula 1 test in Barcelona when the news was announced that the new chassis was, ‘feeling a bit poorly’ and wouldn’t be making an appearance until later in the month.

Speculation soon mounted however that the absence was actually the result of a pre-meditated accident in which the team’s new F112 drove itself to despair, then into an FIA-calibrated breeze block in an attempt to end its participation in the 2012 season and this tawdry, miserable, indifferent world. 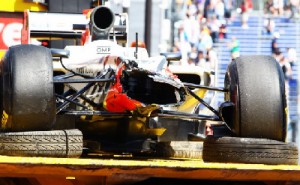 “I don’t think we should ignore the possibility that the new HRT would rather smash itself to bits than face another year of humiliation in front of a billion people,” automotive mentalist specialist, Warren Wogan explained.

“There’s only so much crushing embarrassment and degradation man – or, indeed metal – can take and HRT might just have found, financed, built and driven it flat out into a concrete wall.”

“Though on the face of it, even flat out wasn’t quite enough to put itself out of its misery,” he noted.

The car’s attempt to throw a seven came just over a week after the distressed chassis had to be talked down from the top of a multi-storey Madrid car park and follows last year’s incident where it’s predecessor was found inside a locked garage with its Cosworth engine running.

“It will need constant care and attention to get over this: a thorough valeting –  inside and out – nothing but the finest octane petrol and a promise it won’t have to compete until it’s at least 2 seconds a lap faster.”

“Or they could just wait for the new Marussia.  It’s probably the one thing slow enough to get its self esteem back,” he speculated.

Nobody sure who anybody working for any more