The ruthless, bloody fight to the death for Mark Webber’s Red Bull seat is to be filmed by the BBC’s Natural History Unit.

Ever since the tortured careers of Scot Speed, David Coulthard and Sebastian Bourdais were cast into the F1 job centre, the identity of either Red Bull driver has been a horror show of dog-eat-dog and driver-niggle-other-driver-prior-to-crashing-into-him.

Now, following the latest declaration of intent to unseat incumbent grizzled greying Antipodean miseryguts, Mark Webber by the newest Toro Rosso aggressive juveniles, the same unit charged with filming a pack of wolves ripping the throat out of a pregnant Bison in glorious HD are to be the official documentarist for the fizzy-drink sponsored fight to the driver dole-queue. 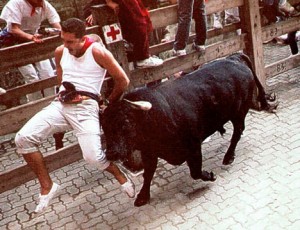 Alguerasari gets that difficult phone call

“This is a brilliant opportunity,” 21st Century Dr Doolittle, David Attenborough told us.

“Though many of us think we know all about how a Formula 1 Team habitually culls its roster to recruit a new phalanx of alpha males, never in the history of cameras have we been allowed into this once utterly private realm to gaze upon the bestial carnage at first hand.”

The new series – ‘Laps Land‘ – will feature genuine first-hand footage of all the relevant protagonists with the makers promising no-holds barred coverage of driver dressing downs and drubbings never previously caught on film.

“Basically there will be a lot of yelling and screaming and blood flying and crying and grown men sobbing and shitting themselves in terror their minutely orchestrated proto-childhood was actually a grotesque manipulated fantasy built on the deluded proxy dreams of their frustrated starstruck fathers – in stunning high definition.”

“It will make that bit where the shark bites the seal in half 30 feet out of the water look like a fucking Dogtanion cartoon,” said the Knight of the realm.

Man with spare $25m found to save Austin GP