Paul Di Resta is to try and get at least one journalist to physically pass out with boredom during an interview in the 2012 season.

The 24 year old Force India driver came close to inducing spontaneous unconsciousness several times during his full debut year and is confident he can hone his narcoleptic abilities for this year’s competition.

“2011 was a really special year for me,” he droned at reporters. 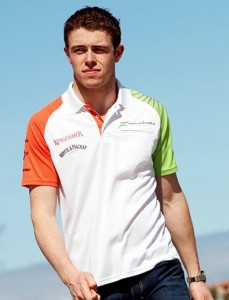 “I finally made it to Formula 1, scored my first points and established myself for a second season. But I was still disappointed that my thoroughly unengaging soporific monotone didn’t cause at least one interviewer to lapse into an involuntary comatose state.”

The Scot impressed onlookers with his calm and methodical performances behind the wheel in 2011, but the same viewers often had to jam forks into soft, yielding flesh, scream till their tonsils snapped or pour salt into their eyes to maintain consciousness whenever the Livingstone-born lad opened his mouth.

“Paul was a real breath of fresh air for 2011,” one easily excitable fan commented.

“I especially liked the way he eased me into that post-Sunday lunch coma once the race was over.  I used to have terrible trouble especially if I’d had too many sprouts.”

“But 15 seconds of him and the family had to practically crowbar me out of the armchair long after it had gotten dark with smelling salts and Back to Black at maximum volume.”

The Scot will make his first attempt of 2012 at the unveiling of the new Force India challenger later today where he will try to make Martin Brundle nod off into a microphone stand during a question about off-season holiday destinations.