Frank Williams has ordered his handler to move his wheelchair closer to the emergency exit.

The recent exodus of chief spanner monkey, Patrick Head together with sponsor AT&T caused the head-of-his-own F1 team to consider for the first time heading off everyone else at the pass.

And when he was sure nobody was looking, the 69 year old whispered instructions into his handler’s ear whereupon the titular chief’s Karma Ergo Transit 115 was casually wheeled about 9 feet closer to the main fire exit as if he didn’t have a care in the world. 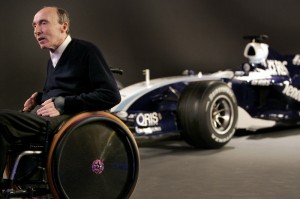 “Ever since he was the first to recognise Patrick Head’s pugnacious genius back in the 70’s Frank’s always been one step ahead of the opposition.  So it doesn’t surprise me given recent developments that he’s brilliantly realised he may have to make a run for it at any moment.”

“Albeit without actually using his legs,” clarified the talentless bell-end.

The ex-able-bodied team chief made the decision to sneak out whilst the going’s good when it became clear the route to his disabled car parking space was about to get jammed with his employees all jockeying for the exit.

“I love this team,” an anonymous ex-head of Engineering who just left the company said.

“Though I loved it more when I got to visit the rostrum, drink champagne, lean over the pitwall in jubilation, wave from the top of a double decker bus, earn enough to feed my family and get recognized in Didcot – in a good way.”

“So now we’re being bankrolled by the developing world and hustling to keep ahead of HRT I’m keen to use my skills do something less embarrassing.”

“Basically I’m off to flog screenwash at Halfords,” he admitted.