53 year old Newey’s MBE for services to British Motorsport may look a great honour Regal botherers have commented, but in awarding only half the level of gong given to the likes of wizened tea-time telly troubadour favourite, Bruce Forsyth, Her Royal Highness has made explicit her belief the RB7 was actually bobbins with only the skills of pilot Vettel making it look all that.

“She may not look it but Liz is pretty clued up about her F1,” BBC regal arse-kisser, Nicholas Witchell told us. 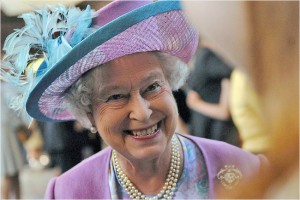 “Hurry up you oik, the bar’s about to shut”

“Right from when Jackie Stewart was trying to burrow his way up the Windsor dirtbox with his Royal Tartan and It’s a Knockout backing to turbos, carbon fibre, Prost vs Senna and Max Mosley’s arse being splashed across the tabloids, Her Majesty has kept her regal eyes peeled for anything F1-related.”

“Indeed, aside from occasional moments in the 80’s when BBC highlights clashed with the snooker or darts and she had to defer to her mother, the Queen’s Mother, F1 has rarely been off the Royal goggle box.”

And with that level of expert knowledge in her hereditary exhaust pipe, slapping the Red Bull chief designer with the same brush as Lorraine Kelly leaves everyone in no uncertain terms who she believes is really king of the F1 castle.

“There’s no doubt about it; the Supreme Governor of the Church of England is a Seb fan,” Witchell genuflected.

“The pole position record, the cheeky grin, meaningless aphoristic shrieks of self-promotion and finger pointing puts Vettel right up there with other firm Royal sporting favourites like Bjorn Borg, Red Rum, Henry Cooper and the bloke with the massive legs from the Bran Flakes ads.”

“And of course, the German National Anthem is always a bit of a bonus round the Windsors as well,” he added, bowing and scraping.