A series of stabbing abdominal pains brought on by acute squeamishness is interfering with Williams marketers’ creation of Senna tie-in trinkets.

Ghastly walking wank stains had been noisily salivating with faux-nostalgia spin-off opportunities ever since the dead 3 times World Drivers’ Champion’s nephew found enough cash to be part of yet another wildly optimistic Williams revival.

But now the 2008 GP2 champion has arrived; grimy, dispiriting connections with the charismatic driving ethics vacuum have proved harder than expected to turn into rancid, shameful marketing dollars. 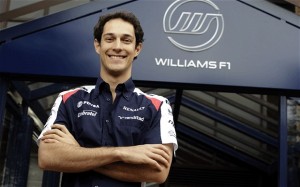 Head of Making Stuff Seem Sexy to get Shallow, Desperate People to Fill their Aching, Pointless Lives with it, Douglas Cumbucket told us, “ever since I witnessed Gilles Villeneuve corkscrewing from his shattered Ferrari live on television, I dreamed that one day I could transform the pain of sporting tragedy by making oodles and oodles of money out of it.”

“That pirouetting corpse was like a cash register dynamo to my then untrained marketing mind.  But the second I saw Bruno’s usefully familiar face at the Williams gates, I knew my excited 10 year old boy’s t-shirt, flag and commemorative Autosport supplement vision had finally came true”.

“Not only did he look a bit like Ayrton but watching as he whizzed past in his trademark, stolen helmet design it was like it was him.”

“So long as you didn’t then look at his team-mate’s lap times.”

But wanting people to think of his uncle’s dazzling phosphorescent brilliance every time the nephew trundled round at the bottom of the timing screens has proved harder than first thought for the slimy meaning-void.