Animals matching a human genetic fingerprint have not been found in the Kingdom of Bahrain, Royal officials have confirmed.

The tiny Gulf State and chief importer of Saudi Arabian thumb screws issued the statement following analysis by the independent commission, Bahrain and the Bahrain Royal Family are Divinity Personified; Any Other Opinion is Heresy and Owners of Such Opinions Will be Shown the Error of this Thinking with the help of this Royal-approved Tool Set.

“Following detailed, in depth analysis by our highly respected team of fully trained, highly respected, fully trained cousins of his Royal Highness Hamad bin Isa Al Khalifa we have concluded that – outside of his Majesty, His Majesty’s family and His Majesty’s security advisers – there are no human inhabitants of our magnificent Kingdom which I stress is still open for business and comes complete with pleasant weather, full wi-fi coverage and now largely servile population,” chief Kingdom announcer, Crown Prince Salman bin Hamad bin Isa Al Khalifa addressed a rally of cheering cousins. 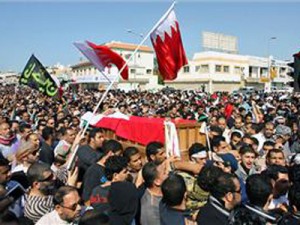 “Such clever monkeys with their pretty flags: and a nice box to put them in, too”

The investigation was kicked off following allegations bits of what looked like humans were turning up in bin bags, drains and hidden down the back of Bahrain police stations.

Positive identifications could have proved significant as – if true – the pre-fabricated country’s Grand Prix would have been placed in jeopardy and with it, millions of dollars in hotel bookings once the mass murder became too damaging to European car manufacturer sales.

“We haven’t found a single one,” the Crown Prince explained; “and believe me we’ve looked everywhere.” 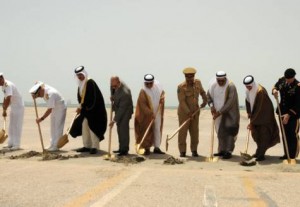 “There were people who claimed they were of course; but just 10 minutes in a room with one of our dedicated staff of investigators and nearly all of them were literally screaming to change their minds.”

“They weren’t even trying very hard.  Some of the ones I saw after questioning didn’t have any thumbs!  I mean come on – at least get the basics right!” he chuckled.

Those choosing to travel to the country for the race in April have been urged by the Foreign Office to get their human status verified, beforehand.

“We’re not saying you’ll definitely be savagely beaten, tear-gassed or shot,” a spokesman explained, “but we are saying pop it on the list of things to do before you go along with getting plenty of sun-block and Alka-Seltzer.”

“You wouldn’t want to have your holiday ruined by going and getting your retinas detached or being unable to lift anything heavier than a paperback for the rest of your agonising life,” they told us.

Haas looking forward to year of asking Ferrari what this does again?