Gatwick Travel Lodge: The Formula One Teams Association is to leave itself it was announced.

The 3 year-old loose alliance of F1 teams, created to capitulate more efficiently during long, drawn out, futile negotiations with Bernie Ecclestone, decided it had had enough on Thursday; announcing its intention to divorce itself at the same moment.

“After many hours of difficult discussions concerning what exactly the point of the organisation is it’s been decided that it would be better served for both parties to leave FOTA,” FOTA told journalists. 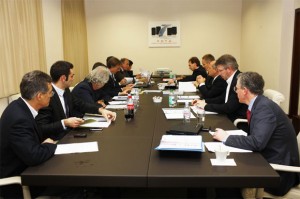 “Next item on the agenda: why there shouldn’t be a second item”

“To function effectively, an organisation must have the confidence and support of all its members and neither FOTA nor the members of FOTA felt this was any longer the case.”

“As of this moment therefore, FOTA has agreed to have nothing to do with itself for the foreseeable future, will take a brief holiday – we hear the Seychelles is nice at this time of year – recharge its batteries and try to move on with its life as best it can.”

It’s not known what FOTA intends to do on its own now but life after the glamour of hanging around with people like Martin Whitmarsh and that bloke from Ferrari who sounds like Joe Dolce is bound to prove difficult for the now former talking shop.

“FOTA was used to living the high life,” analyst Chet Bankrupt told us.

“Swanning around the most glamorous locations in the world and Silverstone as a powerful billion dollar clique making life-changing decisions like how to judge transfer pricing accounting entries and what you’d call F1 if you ever had the balls to set up a rival to it, is a tough gig to give up.”

“It will surely only be a matter of time before it becomes tired of its premature retirement and starts going off making random agreements with other mothballed organizations, calling pointless meetings and issuing press releases about broadcasting rights arrangements absolutely nobody gives a toss about.”

It’s thought that Marussia and HRT would still quite like to join FOTA otherwise they’ll struggle to justify their own existence.