Bedroom, curtains drawn: Robert Kubica is deferring his return to F1 whilst he conquers Codemasters’ simulation of the same thing on the hard setting, writes our reluctant sportsman correspondent, Steve Tram-Lady.

Announcing his continued absence from the Formula 1 World Championship through not announcing anything at all about anything, the ex-rally enthusiast appeared resigned to his fate as the one who let Felipe Massa be humiliated to death by a man in a big hat.

But close friends and idle speculators are adamant that the real blame for the Pole’s position away from the grid is code-monkey haven Codemasters’ increasingly realistic gameplay; convincing the ex-Renault pilot he may as well stay home for 2012, glued to his television set at his luxury Krakow bungalow, dressed only in his underpants. 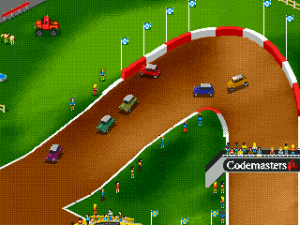 ‘What’s the point hanging out with a dipsomaniac when I could be doing this?‘

“Robert is itching to get behind the wheel of a real car,” one, close anonymous friend with an axe to grind told us.

“Or at least, he is getting itch-like signals from the bit of his arm still attached to his body.”

“But getting up at 4AM every day to run up and down Wawel Hill for 2 hours eating nothing but hummus and lemons from the local Aldi only to get in a re-badged Renault that sounds like a swarm of flatulent bees trapped in a greenhouse at the end of it, is severely testing his resolve.”

The 27 year old is instead said to have become hooked on the Warwickshire-based developer’s video game simulacrum; the lifelike physics, ability to customise every aspect of a season and oddly hypnotic sensation of being yelled at by Martin Brundle for 70 laps of the Hungaroring proving intoxicating to the young Pole.

But anyone who thinks the ex-BMW pilot is merely whittling his life away in a twilit torpor of spreadeagled joystick-bashing misery needs to think again, the friend continued.

“In many ways, Robert is taking this as seriously as he did the real F1,” the friend continued.

“He practises every spare minute he gets and has a detailed fitness and diet regime involving thousands of hours of intense squinting and thumb bending washed down with gallons of Dr Pepper and Wotsits.”

“He’s as committed to this as he’s ever been committed to anything: I think he can really do it – or he will be just as soon as we get him off Level 7 of Colin Mcrae,” he added.

Ecclestone to take F1 with him