Overlook Hotel: Double World Champion Sebastian Vettel has been urged to cultivate some sort of psychosis to avoid everyone getting bored of his interminable victories, writes our ennui expert, Steve Dull.

Racing to his 11th victory of an increasingly soporific championship, the unfailingly cheerful, impossible to hate 24-year-old stepped from his car with a big happy face, giddily waving at everyone.

During interviews he deflected praise from his own performance onto his team and even found time to flirt and joke with the media with such charm and insouciance it made you vomit uncontrollably. 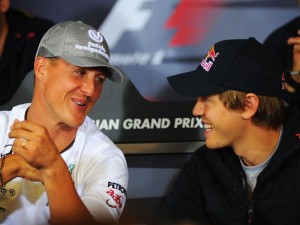 “When I was your age, I’d nearly killed half the grid”

“Seb is personable, generous, kind, good-looking, funny and effervescent.  He walks into a room and everyone around him is immediately energised by his positivity and presence,” paddock pundit, Solomon Gomorrah commented.

“Which is why, sadly he’s such a fucking disaster when it comes to keeping everyone’s interest up at the moment.”

The Red Bull team earned millions of fans in 2010 as the colourful imbecile-drink backed squad crashed into each other, blew up and generally did all they could to conceal their massive dominance during an increasingly entertaining sequence of self-sabotaging performances.

Assisted by their star’s progress beyond puberty and remembering to remove ‘new’ stickers from engine covers has however left the squad comfortably ahead of the rest and the F1 public have been forced to find something inherently interesting about a thoroughly nice bloke winning everything every week.

“Schumacher’s pantomime villain persona did at least mean when he was winning everything, the audience was prepared to stay till the end, even if only to boo him over the line.”

“Unfortunately, with his unfailingly polite and reasonable exterior and scrupulously fair driving Seb has driven this sort of anti-viewer away.”

“Basically, he’s destroyed the meaning of the word Schadenfreude,” Gomorrah added; “which is a bit rich for a German.”

It’s thought that not much personality degradation would need to take place to get the kid from Heppenheim some suitably hateful chutzpah, however.

“All he has to do is grimace a bit: maybe raise his middle finger at the camera rather than his index finger – that sort of thing,” Gomorrah speculated.

“He doesn’t have to drive anyone off the track, humiliate his team-mate during contract negotiations or stage a fake crash though having said that, if he keeps this [level of domination] up, I’d certainly look at chucking in an advanced course of cynical intimidation with an exaggerated sense of self-importance to keep the viewing figures up.”

“Apparently Bernie is getting him a Schumacher DVD for Christmas.”