Total Recall: Nobody in the F1 paddock is quite sure who they’re working for any more, reveals our uncertain employment correspondent, Steve Bumcheeks.

Following the Geneva summit at which 3 existing teams were allowed to change their names to something more suitable for everyone except those who’ve bought any instantly defunct merchandise, many in the industry have been left uncertain as to who is actually paying their wages from now on. 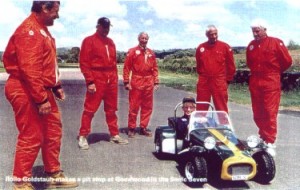 If you think this looks stupid, you wait till we turn it into an F1 team

“You know: the one that sounds like a proper Lotus but doesn’t break down as often.”

“But this morning I wake up and apparently I’m now working for just plain Lotus; even though I’m pretty certain I haven’t been for any job interviews or had my P45.”

The three teams in question, Team Lotus, Renault and Virgin are respectively to be called Caterham, Lotus and Marussia going forwards though equally plausibly could be known as Brian, Sue and Mr Richards or Sainsburys, 7-Up and Foot Locker depending on your attitude to logic or upcoming sponsorship discussions.

“I think it’s utterly charming the teams can be so understanding as to each others’ self-image issues,” Professor Hans Grasping of Bournemouth’s University of Money commented.

“Individuals can have identity crises which can be psychologically very traumatic and that’s undoubtedly what’s happened here.”

“Unless it isn’t and it’s actually about conning a gullible audience into giving them more money in which case it’s very, very impressive and the public are very, very stupid,” he added.

Employees of various teams were said to be confused, very confused and Eddie Jordan regarding who the fuck employed them, where they now worked and whether or not this meant they truly existed in a physical sense, any longer.

“Look, I’ve got a mortgage to pay – all I want to know is: does this company name on my payslip mean anything, is the factory still where it was last Tuesday and do I still come to work in this company embroidered shirt or do I have to scribble it out in biro or something?” the employee was still going on about.

Simone de Beauvoir was said to be considering whether these developments encouraged her thesis that existence precedes essence or in fact undermined the Hegelian concept of the Other before realising she’d been dead for 25 years and actually it was all a bit academic.