After 55 laps of the usual cartoon violence, 30 year old Massa parked his Ferrari in Abu Dhabi Parc ferme, firmly of the opinion that if it hadn’t been for Lewis Hamilton not getting in his way this time, things could have been a lot worse than 5th place.

“Once again I am finishing the race disappointed and once again, I am disappointed in Lewis,” the Brazilian told reporters, without being asked. 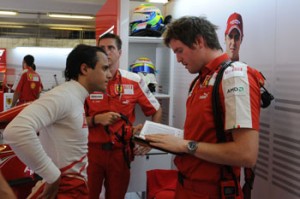 When would you like the distracting lilt of my northern accent to become publicly audible?

“I had a very difficult race; with the tyres, with the strategy and – finally – with Lewis not being the reason I have to talk about why I’m slow again,” he explained.

Journalists were left disappointed at the end of the twilight race when it became clear they’d have to interview the slightly dull Brazilian about his perfunctory, error-ridden run without so much as some unconvincing trash talk from his Mclaren nemesis to stave off their jet lag-heightened hangovers.

For despite sterling efforts from the Sao Paulo resident to catch and inadvertently tangle with Red Bull pilot, Mark Webber the 2008 runner-up was left fuming about having to leave the track entirely from his own efforts.

“If Lewis had been slightly closer to Seb going into turn 1, he might have tangled, gone to the back of the field and thereby renewed his deathwish with the Ferrari Number 2 during his charge back through the field.”

“And the last thing Felipe needs or wants is for anybody to notice that,” he added.

It’s thought that Robert Kubica is making a limp-wristed gesture about all of this, possibly because it’s the one thing he can do.

Bottas luck to be weaponised