Bombay Bicycle: The entire population of India gave thanks to Team Lotus last Sunday for not letting Karun Chandhok tar his fellow countrymen with the same brush, writes our tarring everyone with the same brush correspondent, Tara Brush.

Electing to start the race with usual clod-hopping Italian veteran, Jarno Trulli, the Norfolk team revealed that whilst they were fine with giving their ethnic money tree half the weekend to tool around waving at his fellow countrymen in return for not crashing the car, they were buggered if they were going to let the 27 year old anywhere near this actually quite expensive bit of kit come Sunday.

Yet despite their lack of F1 viewing experience, fellow Indians surprised patronising onlookers by totally understanding the point of the exercise. 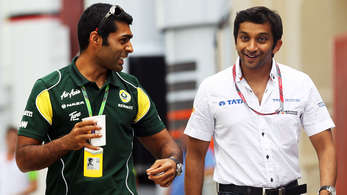 And who wrote *your* cheque?

“People watching on TV who just see oceans of brown faces, turbans, elephants operating as public transport and mind-boggling poverty could be forgiven for forming an opinion of us not a million miles from the racist caricatures of a Spike Milligan sketch,” Buddh Circuit local, Indi-bub Dub-a-dub Chicken Vindaloo Singh told us.

“But on the other hand, anyone who forms their opinions on an entire nation from watching a sports event broadcast from one tiny corner of it are about 10 times more stupid than the people they think they’re above in the first place.”

“The bottom line is we know full well why Lotus want Karun in the car just long enough for him not to do some serious damage.  To be honest we’d have rather not had him in the car at all; we think his commentaries are excellent for the BBC whereas his driving is frankly, an embarrassment.”

Fellow countryman Narain Karthikeyan meanwhile failed to move the populace despite keeping up with Australian David Ricciardo in the Hispania.

“That was alright, I suppose,” Singh continued, “but have you seen what he looks like?”

“Frankly, if they’re driving that heap of shit I want the fucker looking like Omar bloody Sharif at least.”

“We’re the 4th biggest economy in the world. If an Indian gets out of a car that’s been lapped 5 times I don’t want the world thinking a giant, hairless Cocker Spaniel suddenly crawled into a set of flameproof overalls when he takes off his helmet– it’s embarrassing,” he added.