Shrugsville: Who cares about the Formula 1 World Championship? all the teams that aren’t Red Bull just said, writes our meh correspondent, Jim Whatever.

Arriving at the new Indian Buddh circuit near Delhi, all the F1 teams were busy contemplating the fact that both World Championships were already sewn up with 3 races still to go but; you know – so what?

For the past 8 months the rest of the grid had been systematically handed their arses on a plate by Sebastian Vettel and the rest of his sucrose-stuffed clubbing-aid team. 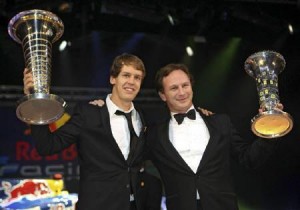 Yet now the goal everyone else set off for is well and truly dead and buried it’s been decided that actually, everyone was really just turning up for the Craic.

“But you know: we go racing as a team.  For the racing.  For the heritage.  To win – not too much and not necessarily to win something as a result of winning things you understand, just to win.  The odd race – as a team.”

“Did I mention heritage?” he added.

“You wanna byan at?” he added.

Sebastian Vettel was thought to be polishing his index finger particularly vigorously in preparation for shoving it somewhere very hard following this weekend’s result.